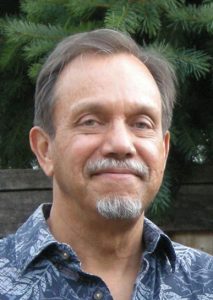 Barry Truter was born in India and has been a traveller for much of his life. His music and songwriting are influenced by the rhythms of the places he has lived and worked including India, Fiji, USA, England, Canada, and a spell at sea working on a tramp freighter.

Barry is a co-founder of the Georgia Strait Guitar Workshop, and teaches guitar privately and at music camps in the Pacific Northwest. He can also be found singing and jamming with friends in the living room, on the ferry, in a coffeehouse, on a protest march, at a sea festival, and wherever live music can be found. As he says, “May there always be the joy of music in our lives.”

In 2011, Barry released a solo CD, Traveller, consisting of originals and selected covers supported by guest appearances from some fine musicians, including his Fraser Union buddies, whom he met at the Vancouver Folk Song Society many years ago. He looks forward to more years of music-making with Fraser Union – making music that speaks to life and the joy of living.